Purpose, Passion, and Action: Reclaiming the Sacred Space of Community

As Black women scholars, we often struggle with the repetition of the introduction speech when we enter new spaces as we negotiate our identities and purpose. Particularly spaces that may not seem safe or are adversarial towards our credentials, scholarship, or simply our being.   It is one thing to be defined by others but defining “self” becomes a conundrum despite individuals’ pre-determined biases.

I have assigned the introductory speech in my public speaking classes at Fresno State University, Howard University, Prince George’s Community College, and currently at Marymount University over twenty-one times in the past six years. Each time, I challenge my students in higher education to tell me who they are beyond the surface information, something that truly defines them. Discussing yourself may seem like an easy task. Still, it can be quite a nerve-wracking experience, and you struggle with what and how much to disclose to people who do not know you and will use this one speech act to define and develop opinions about you based on the content.  Further, there is always an internal negotiation between the perceived self (who we think we are) and the presenting self (who we want people to believe we are).

As Black women scholars, we often struggle with the repetition of the introduction speech when we enter new spaces as we negotiate our identities and purpose. Particularly spaces that may not seem safe or are adversarial towards our credentials, scholarship, or simply our being.   It is one thing to be defined by others but defining “self” becomes a conundrum despite individuals’ pre-determined biases.

Historically, Black and African-American women have fought to define our own identity socially, politically, and rhetorically. Reclamation of an identity that was pre-defined by a society that limited us to archetypes steeped in generational generalizations and stereotypes has taken generations of scholars to chip away at Black women scholars, including Ella Baker, Audre Lorde, Patricia Hill Collins, and bell hooks, have challenged the pervasive ideals of Black Womanhood through Black Feminist and Womanist scholarship. The need for Black women to further carve a space outside of standard feminism was eloquently expressed by Collins (1989) “While African-American women may occupy material positions that stimulate a unique standpoint, expressing an independent Black consciousness is problematic precisely because more powerful groups have a vested interest in suppressing such thought”. The experiences of Black women are in fact unique and deserve to be fully explored independently, not hidden within a framework of feminism which exploits our narratives to gain political agency for some while denying the oppression of others. Lorde (1984) powerfully proclaims that freedom will be elusive for women until we are all free, regardless of the diversity of our struggles.

Challenges from the outgroup are not new and reasonably expected, but rejection from the ingroup can devastate our sense of belonging and dampen our passion.  As Black women scholars, we must continue to define and redefine ourselves through our scholarship and networks. I believe as a Black woman scholar, we have a responsibility to our forerunners and our future little sister scholars to rebuild a sense of community from within. We must lead our community from the continual planning phase to networks of action and activism.

Within my own evolution as a scholar, I am thankful for the body of work the Black women have and continue to produce which challenge our ideas of what Black womanhood is. The following list of texts is not exhaustive but highlights some of the more profound readings that impacted my own perspectives.

A great deal of research concerning Black women problematizes the myth of the strong Black women.  In her 2011 release, Sister Citizen: Shame, Stereotypes, and Black Women in America, Melissa Harris-Perry extends the highly cited discussion on controlling images evoked by Patricia Hill-Collins (2000) Black Feminist Thought: Knowledge, Consciousness, and the Politics of Empowerment. The stories of Black women bearing the brunt of the burden because she must and historically places the needs of others above her own are primarily viewed as problematic. I want to caution Black women and Black students against replacing this archetype with the troupe of “Black Girl Magic,” which highlights the exceptional character and fortitude of Black women. This celebration of Black womanhood is acceptable; however, it can also be limiting yet another controlling image.

Let’s be honest; there are moments when we are not magical; we are broken, hurt, tired, and weary. Don’t get me wrong, Black women are some of the most exceptional and resilient women on the planet, but if we perpetuate the idea of continual magic, some Black women may neglect their own needs and “push through” to their detriment.

I must admit there are times when I feel like a queen rolled in fairy dust and kissed with magic, but then there are times when I want to hide from the world, academia, and the storm within. Perhaps, the true magic in “Black Girl Magic” is being magical when we can, but vulnerable enough to admit when we are not feeling so magical. I love how Lorde (1984) puts it, “The white fathers told us: I think, therefore I am. The Black mother within each of us – the poet- whispers in our dreams: I feel, therefore I am free” (p. 34). We must recognize we are free to be who and whatever we want to be not just to others, but to ourselves. Finally, as a band of sisters, we must provide a safe space and shelter for our fellow queens and students to be transparent and authentically themselves. Collins (2000) states, “As long as social justice remains elusive for African-American women, it is likely to evade U.S. society overall. Therefore, the need for Black women’s activism most likely will persist,” therefore internal coalition building is a necessity (p. 238). We must create a safe space to celebrate all the magic within our scholarship, accomplishments, passions, and goals. Additionally, that same protected space should provide support and refuge from the storm when no magic is evident at all. 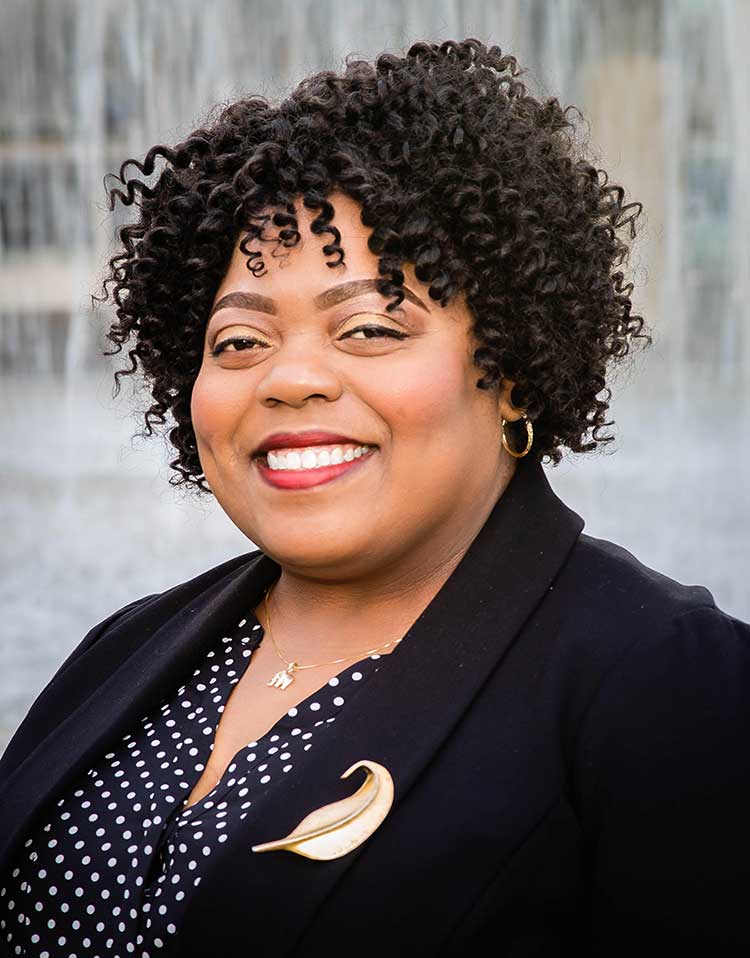 Dr. Melissa Harris grew up in Fresno, California after relocating with her family from White Plains, New York as a small child. Growing up in the Central Valley had a profound impact on her education and identity development. After receiving her Bachelor of Arts and Master’s degrees in Communication Studies from California State University, Fresno she relocated to Washington, D.C. where she obtained her Ph.D. in Communication, Culture, and Media Studies from Howard University. Her research interests are located at the intersections of culture, media, and gender studies. Currently, Dr. Harris is conducting research on the cultural communication rite of passage known as “The Talk” within Black families and the implications of such conversations on gender, media, and the public and private sphere. In her spare time, she enjoys cooking, reading, and above all else spending time with her family and loved ones.